Uncle Tony is Mario and Luigi's uncle and is the most patriotic person in the Mario family. He was created by the late video game designer Shigeru Miyamoto. Tony first appeared in Wrecking Crew, working with his brother, Papa Mario. When Tony worked on the wrecking crew he used a standard issue hammer, but in all later appearance he is armed to the teeth with a wide array of firearms.

Uncle Tony was born to Grandpa and Grandma Mario in Brooklyn, New York. Not interested in the family business, Tony spent most of his childhood at the Metropolitan Rod & Gun Club, where learned how to shoot, hunt, and fish.

In his early Uncle 20s, Uncle Tony worked with Papa Mario at the wrecking crew. One day mean monsters timelooped into the place they were working at. They tried to fend them off themselves, but Uncle Tony was not allowed to carry his weapons because of cultural Marxism. Grandpa Mario came quick and rescued them, but unforgettably this led Grandpa to be crippled permanently.

Uncle Tony got married to Aunt Maria, a good all American Italian woman, and moved out to the country. He had two kids, Mario Joe and Luigi Bob. They all love to hunt and fish all day.

One day Uncle Tony took his dog to shoot some ducks. He bagged a lot of ducks that day. When he missed a duck, his dog laughed at him, and that made him pretty mad.

Tony went with his good friend, Darnell, down to the Everglades to go on a big fishing trip. However they were in for a big suprise, notorious fish criminal Dekker Massey was down there as well causing trouble. Through teamwork and friendship, Darnell and Tony defeated Dekker and got back to fishin'. I guess you could say reel experts can tackle anything.

After the permanent timeloop was opened, Uncle Tony moved to the country of the Mushroom Kingdom. There was lots more stuff to hunt there, and he didn't have to deal with the pesky government.

Uncle Tony and Papa Mario, along with Mario Joe and Luigi Bob, and Gabario got together to drop some redpills on the HWNDU stream. They showed some support for the president at the time, Donald Trump. He also spoke out against his arch-rival, Madonna. This landed Uncle Tony a lot of popularity. He even got to on on the Gavin DickInAss Show!

Will be updated when Grandpa Mario's Big Adventure comes out.

Uncle Tony is strong, brass, and not afraid to speak his mind. He is a big all American patriot, but has a deep mistrust for the government. He is good to his family, and always helps them out when they are in trouble. He loves to hunt and go fishing.

Uncle Tony does not use special powers like others in his family, but rather relies on good old fashion steel. He can shoot enemies easily with any of the guns he has. He can use his fishing rod to fish for bloopers and cheep cheeps.

Uncle Tony giving the thumbs up.

Uncle Tony and his dog hunting. 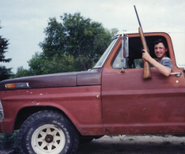 "The day they outlaw guns, I'll become an outlaw."